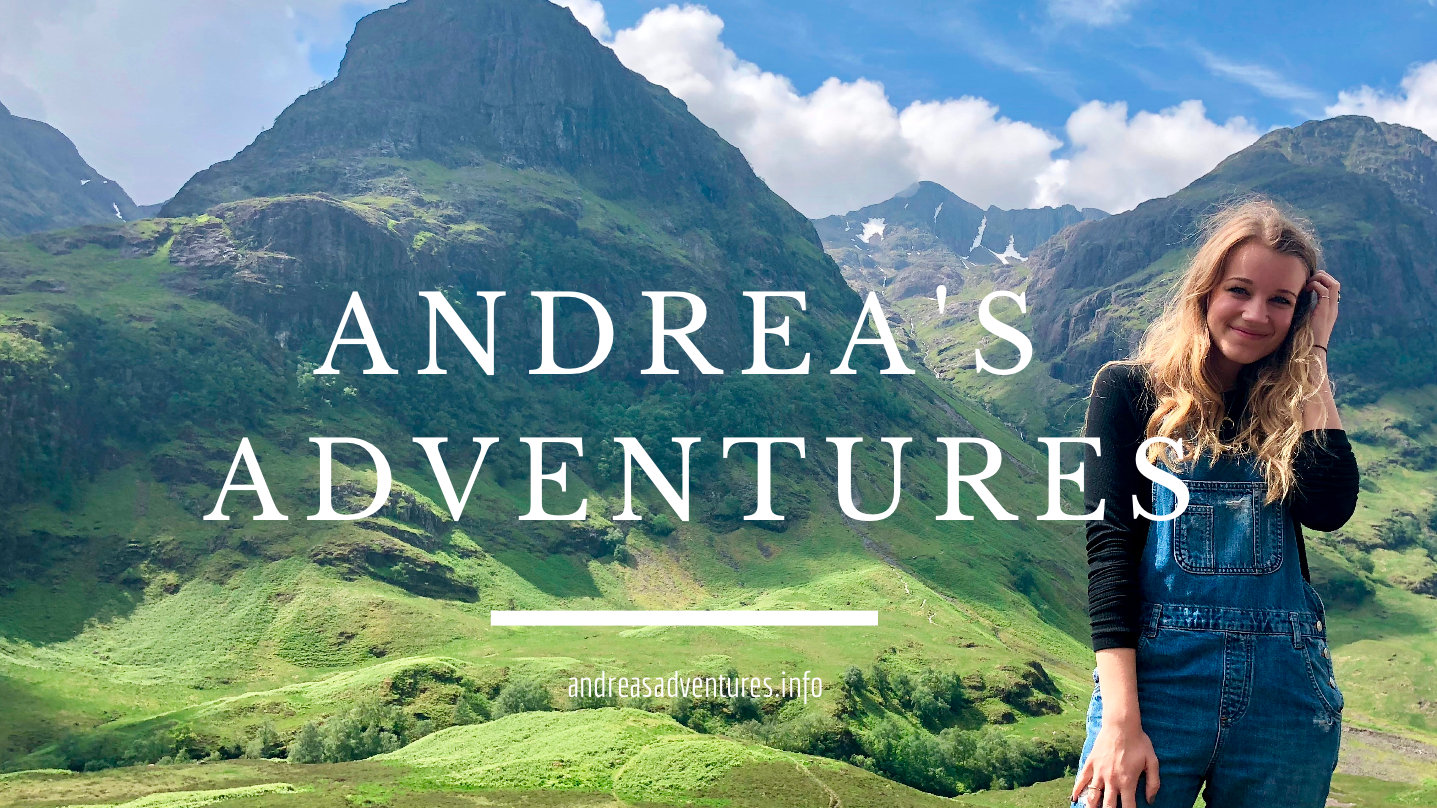 The following blog is excerpts from Andrea’s final report that speak to her practicum experience while she was taking The Social Media Magnet course at Belmont University in the Fall of 2018.

“The first expectation or thing that I wanted to learn from this class was to learn more about the behind-the-scenes, analytic side of social media. I have had a little bit of experience working with social media, but I typically tend to stay on the content creation and planning side of things. I was really excited to learn more about things like SEO and things like that that I would be able to show my results. I definitely learned more about SEO and how to use Google Analytics well, which I think is a very valuable skill! The second expectation I had was to decide if this would be something that I would want to do outside of this class. In the past, a lot of people have told me that they think I should start a blog. So I was hoping to see how my blog was received, and to see if I enjoyed it enough to continue with it after this semester. I think that my blog was fairly well received, but it really was a lot of work. As for my goals, I met all of them so that was exciting! 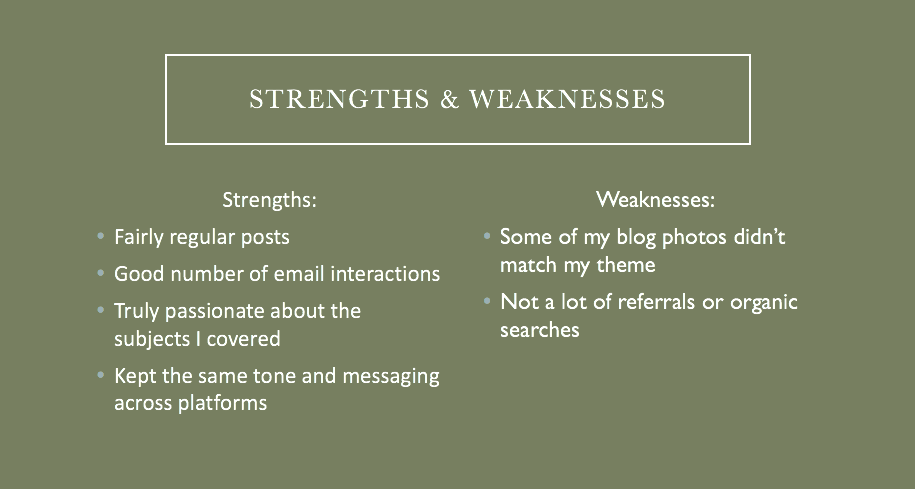 I think that some of the main strengths of my blog were because of the messaging assignments we did. I think that I had it planned out pretty well, to where it was easy for me to stay on brand and keep my messaging the same across platforms. Dr. Huggins always says that staying on brand is one of the most important things that you can do when running a blog, and I have to agree that that is the case. I think another strength that I had was that I actually like what I was writing about. Sometimes when you’re doing work for school it can be tough to do your best work because you aren’t interested in what you’re talking about. But because I kept my messaging the same and am really passionate about the things I was writing about, it lead to my posting regularly and having great things to say in my emails. So, I think that those were the two main things that drove the success of my blog. However, I did have some issues with photos. I didn’t have time to take a bunch of new photos, but some of the photos I already had didn’t really fit my theme or usual style of photo. I also couldn’t really figure out how to gain organic searches or referrals. 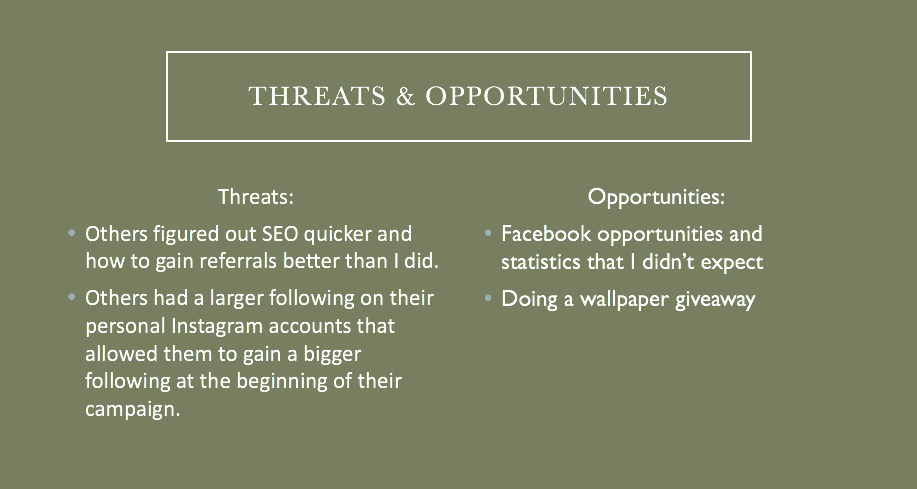 Other people figured out how to use organic searches and referrals quicker than I did. I filled out all of my SEO and snippets for Yoast SEO like we learned in class, but believe that my keywords weren’t matching my target audience as well as they needed. Maybe it was just that people don’t really search for fashion blogs or faith blogs on Google. I know I would be far more likely to attempt to find those things on Instagram. Also, I think that some of my classmates might have had a larger following than me on their personal instagram accounts, and therefore had more people that they could ask to follow their blogs and emails at the beginning of the project. However, I did have some cool opportunities that I didn’t expect, like the great reaction I had to the email exclusive wallpapers I made. I also had far more people interacting with my posts on Facebook than I expected with my limited page likes.

Overall, I was really happy with the total number of subscribers that I had to my weekly email.  This was my highest ranking out of all of the things that we measured in the class analytics. I think that this proves that my blog was a success, because I got the sixth most number of people to do the thing that was said to be the hardest thing to get people to do: give you their email address. I take this to mean that although I may not have had the most number of users or pageviews, the people that did follow along with my blog were loyal enough that they wanted to fully commit and give me their emails, allowing me to speak directly to them once a week!

My three biggest takeaways from this class are: 1) Have the same messaging across platforms is so important, 2) Blogging is a lot of work, and 3) Building a following from scratch is difficult, but I have gained a ton of respect for businesses and influencers that do it.  I thought I knew these things simply from interning with a social media influencer, but I didn’t realize how much time she must have spent just thinking about her blog. I mean, I genuinely think that if you added it all up I spent at least two hours a day thinking about my next blog post or Instagram post or what I would write for my class assignment memos. That’s a lot of brain power! This class caused me to gain a lot of respect for people who really do this as their job, because of how difficult it is.”

If you are a college professor and are interested in learning more about The Social Media Magnet, check our professor overview with highlights of our features and benefits.  If you would be interested in considering The Social Media Magnet for your university, we have a professor preview function that would allow you to see and work with some of the content.  Or if you just have some general questions, feel free to contact us.  We would love to assist you however possible.